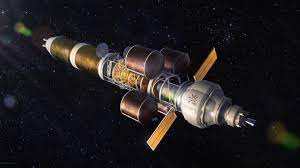 The Pentagon's Defense Innovation Unit, which works to apply commercial technology to military problems, awarded the contracts to Avalanche Energy and Ultra Safe Nuclear, both in Seattle, Washington.

They will provide "solutions that give small spacecraft the ability to maneuver at will in cis-lunar space and enable powerful payloads that support the expansion of Department of Defense (DoD) space missions," the statement said. The term "cis-lunar" refers to the space between the Earth and the Moon and the Moon's orbit.

"Nuclear technology has traditionally been developed and operated by government, but we have discovered a thriving ecosystem of commercial companies, including start-ups, driving innovation in space nuclear technology."

Ultra Safe Nuclear is researching a next-generation radioisotope battery that uses the decay of radioactive isotopes such as Americium-241 or Plutonium-238 to generate electricity.

Similar technologies have powered Nasa's missions into space, such as the Voyager, Cassini, and New Horizons spacecraft. The statement states that Ultra Safe Nuclear's technology could outperform existing radioisotope systems by 10 times.