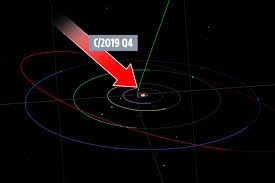 Dubbed "C/2019 Q4", the high-speed body appears to be on a path originating from another star system that will see it fire past Mars in October.

That would make it only the second interstellar visitor ever known to have reached the Solar System.

The first, a cigar-shaped object called Oumuamua, took the world by storm when it careened past Earth in 2017.

A pair of Harvard scientists claimed it could be an alien spacecraft, sparking a frantic flurry of scans as the object closed in on the Solar System.

Experts found no signs of alien signals, and Oumuamua whizzed past Earth before its true origin could be determined.

Now researchers at European Southern Observatory (ESO) in Germany say an object once thought to be from the Solar System may actually be an interstellar traveller.

C/2019 Q4 was spotted on August 30 by amateur Ukrainian astronomer Gennady Borisov, and scientists have studied it ever since.