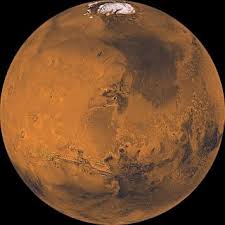 Now, researchers from Harvard have shown that thin layers of silica aerogel could warm the surface and block UV radiation while still letting visible light through. That could be enough to keep water liquid and let plants photosynthesize within a given region.

While Mars was once a lush, watery world that could have supported life, that's definitely not the Red Planet we know today. Modern Mars is a dried-up husk, with the only water still there locked away in either the polar ice caps or salty lakes deep underground. The thin atmosphere means that there's very little oxygen, it's extremely cold and there's no protection from UV radiation from the Sun.

The new Harvard study could solve at least a few of those problems, thanks to silica aerogel. It's one of the lightest materials ever created, transparent, and an excellent thermal insulator. All of this means that, at least in theory, a thin layer of silica aerogel in the Martian sky could effectively terraform a small patch of ground below it. This would make the surface warmer, and reflect UV radiation away without blocking visible light.