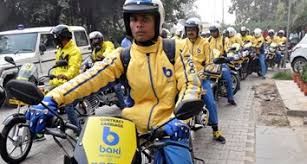 I took a Rapido to work today, and now I want the government to legalize bike taxis.

This morning, when I left for work, I decided to try something different. I normally take an Uber Pool or Ola Share to work because of Bangalore's acute lack of proper transport services. Sharing a ride makes sense for a middle-class professional in his mid-20s because it's cheap, and it's faster and more convenient than a bus.

However, today the city witnessed some major traffic snarls and fares were, naturally, on the higher side. Looking at my options, I decided to try Rapido — a bike taxi aggregator. While I was experiencing a similar experience to my usual ride, I was surprised, for the ride was much faster and much more comfortable. The reason is simple common sense — bikes can navigate congested areas better.

The interesting thing, however, is that bike taxis are banned in the states of Karnatakaand Maharashtra — two states that contribute the lion's share to India's economy. While the concept of bike taxis is not exactly new to India — they have been operational in the state of Goa since 1980 — the Uberization of the segment is, quite obviously, a recent affair.