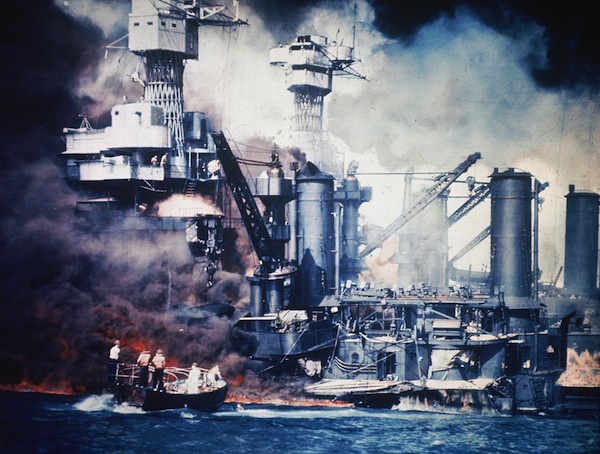 December 7 marks seventy years since the Japanese attack on Pearl Harbor. This incident finally broke the non-interventionist spirit that had characterized the American people—an attitude that was informed by the utter failure of the United States’s very costly entry in the last world war to bring about the democracy that was promised of it. Polls show as many as four out of five Americans opposed intervention. The Pearl Harbor attack changed everything. The America First movement, the largest antiwar movement in U.S. history, folded, for the most part. One of its most vocal leaders, Charles Lindbergh, joined the war effort upon hearing of the Pearl Harbor attack. He ended up flying fifty combat missions in the Pacific Theater.

In October, 1940, U.S. Admiral James Richardson warned President Roosevelt, Admiral Harry Stark, and Secretary Frank Knox that U.S. ships did not belong at Pearl Harbor. Roosevelt responded that the ships would have a “restraining influence” on Japan. When Richardson asked FDR if the U.S. was going to war with Japan, the president responded, according to Richardson, “that if the Japanese attacked Thailand, or the Kra Penninsula, or the Dutch East Indies we would not enter the war, that if they even attacked the Philippines he doubted whether we would enter the war.” But “sooner or later they would make a mistake and we would enter the war.”

Casual observers had many reasons to suspect FDR wanted war. In September 1940, the president had established the first peacetime draft in U.S. history. Voters were worried. The next month he told a concerned audience: “I have said this before but I shall say it again and again and again: Your boys are not going to be sent into any foreign wars.”

In March 1941, safely sworn in to his third term as president, Roosevelt signed the bill creating Lend-Lease, a program of U.S. military aid to Russia, Britain, China, and France. On December 4, 1941, three days before the Pearl Harbor attack, the Chicago Tribune‘s headline read: “F.D.R.’s War plans!” The paper published a copy of Rainbow Five, Roosevelt’s secret plan to create a ten-million man army in the event of an invasion of Europe.

More than a few of Roosevelt’s contemporary critics believed the Pearl Harbor attack was a set-up. In 1945, New Deal critic John Flynn wrote about U.S. agitation of Japan before the attack:...

The Man Who started WWII

The West That Was, Part 3

Finding Light in the Face of Extreme Darkness

Welcome Aboard the R-100