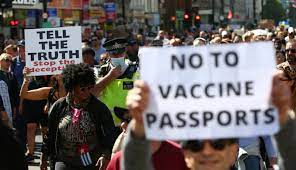 of the virus, health injuries, deaths, infertility, and the injection of metallic markers for control purposes. This is not a conspiracy theory in the sense used by the media meaning that it is false. What the explanation does is to reveal a conspiracy against humanity. This long article is the true explanation of what is being done to us.

Ever since the assassination of President John F. Kennedy, the media has used "conspiracy theory" to discredit every explanation that challenges, contradicts, or disapproves an official narrative. This trick has blinded not only many Americans, but also people throughout the Western world to what is happening to them.

This long article explains what the engineered virus and vaccine are doing to us. What can we do about it? I do not know. The people seem to be powerless. Experts who blow the whistle and tell the truth are censored and discredited, threatened, fired, lose their medical licenses. Such police state measures used against experts for expressing a contrary opinion to the official narrative are the heart of all dystopian novels such as Orwell's 1984.

I found this article on Zero Hedge: