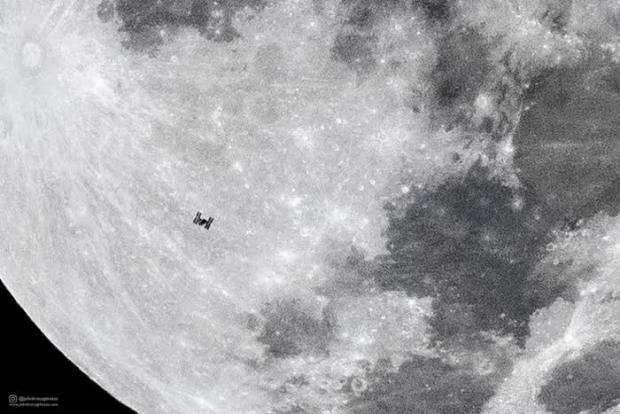 A stunning image of the International Space Station against a backdrop of the moon has been captured as its astronauts prepared for a spacewalk.

The orbiting science laboratory had been reorientated to allow astronauts Kate Rubins and Victor Glover to step out and prepare solar arrays for future upgrades.

Astrophotographer Andrew McCarthy captured the image of the station, which is orbiting 400km above the Earth, while on a roadside in Sacramento, California.

This rare shot of the reorientated view of the station, captured at about 10:44 GMT on Monday, 'instantly became on of my favourite captures,' explained McCarthy.

What made this image remarkable was the orientation of the ISS at the time it was taken and the 'to the second' precision of McCarthy capturing the orbiting lab as it grazed across the Copernicus crater on the moon - before it disappeared.

This lunar impact crater is visible with binoculars slightly northwest of the centre of the Moon's Earth-facing hemisphere.

The solar panels that usually lie flat at each side of the station were seen shifting at different angles due to the spacewalk, adding to the uniqueness of the photograph.