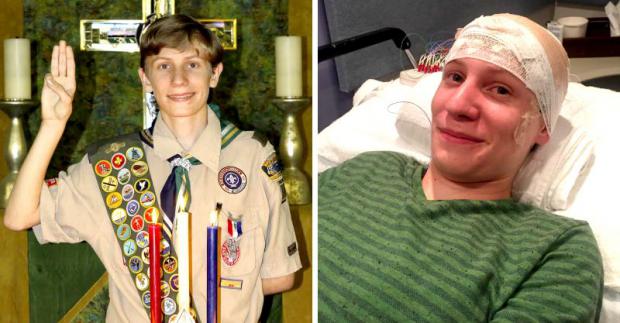 Before he got the Gardasil vaccine, our client Michael Colbath was a superlative athlete and scholar. A happy, healthy and active boy, he was an enthusiastic member of his school's academic teams, soccer player, and long-distance runner who loved backpacking and skiing. At five years old, he could backpack five miles with ease. At six, he taught himself to speed read and handed in a book report on a 600-page novel.

Michael was a committed boy scout and member of his middle school's cross-country team. He pursued his passions for robotics, played in his school band and practiced Tae Kwon Do, earning his second-degree black belt at age 14, just months before he received the Gardasil HPV vaccine.

He raised service dogs for the disabled and earned his certification in first aid with special training in emergency preparedness.

After the vaccine, that all went away.

Years of Merck's relentless marketing persuaded Kathy Colbath to allow her child to receive Gardasil. Merck falsely claimed that Gardasil was safe and effective, and that it would protect children against certain cancers. Merck's advertising said that good mothers must vaccinate their teenagers with Gardasil or face tragic consequences.

In the months following his first injection, exhaustion and extreme fatigue forced Michael away from the sports and hobbies that had been centerpieces of his life. He had trouble staying awake during the school day.

.@baumhedlund and I filed our fourth #Gardasil lawsuit yesterday against #Merck, on behalf of Sahara Walker, 19, of Lake Mills, Wisconsin, who suffered debilitating injuries from the #HPVvaccine. #TheDefender #BigPharma #ProfitsOverPeoplehttps://t.co/p60qxo4C2D