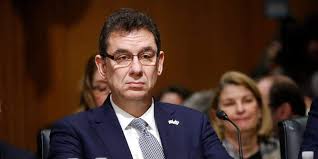 In a Thursday night interview with NBC, the CEO expressed confidence in the ability "to send vaccines within 24 hours basically [anywhere] in the U.S." after receiving emergency use authorization from the Food and Drug Administration, but he remains unconfident in the vaccine's ability to be a silver bullet against people carrying and transmitting COVID-19.

"Even though I've had the protection, am I still able to transmit it to other people?" NBC's Lester Holt asked, to which Bourla responded: "I think this is something that needs to be examined. We are not certain about that right now."

Last month, Pfizer announced that its vaccine – developed along side BioNTech – proved over 90% effective in giving immunity. Although this statistic on its face sounds remarkable, researchers have warned that the clinical trials did not assess whether the vaccine can prevent the virus from spreading.

"We have no knowledge about whether it prevents you from actually acquiring the infection at all," Dr. Larry Corey, a virologist at the Fred Hutchinson Cancer Research Center, told Business Insider.

The FDA is expected to make a decision on emergency use authorization as soon as December 10.