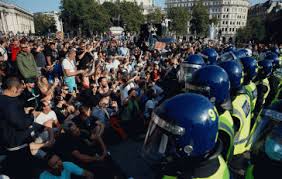 Former CBS Healthwatch reporter and author of The Matrix Revealed Jon Rappoport writes about the "signs of the times."

Large anti-lockdown protests are sweeping across Europe. Denmark, France, Germany, Italy, the UK, Poland. The media are trying to put a lid on coverage of these momentous events.

In a more intimate setting, up close and powerfully personal, gym members and owners in Buffalo, New York, shouted down cops and a public health officer, who had entered the gym because the gathering exceeded the prescribed limit. The gym personnel drove out the cops and followed them, to make sure they left the property.