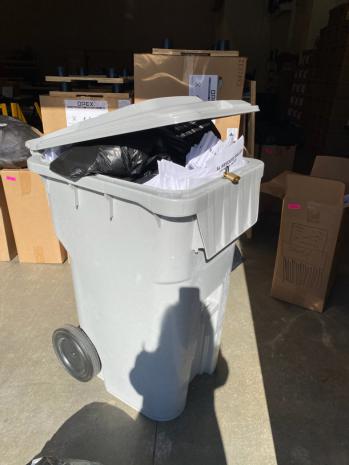 Video has emerged from the state of Georgia showing a professional Shredding & Recycling Company Truck, outside the offices of the Cobb County, Georgia, Elections Department.   The truck was actively shredding what appeared to be trash-cans-full of Absentee Ballots.

Word from the scene is that the ballots were Trump absentee ballots, mailed-in by citizens of Cobb County, Georgia, which were thrown in the garbage by Democrat Election Officials instead of being counted in the vote tally!

The video below is TERRIBLE quality and we're trying to get better video.  But in the video, you can see a truck from A1 Shredding & Recycling operating its portable shredding machine.

The voice on the video is that of Susan Knox, who reports she is in Cobb County, on Friday, November 20, in Jim R. Miller Park "where the Ballots are" and she goes on to say they are shredding ballots.