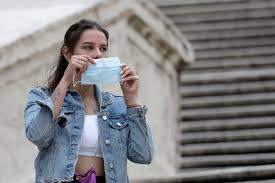 The new law came into effect on Thursday across Italy

Lazio and Campania have already made mask wearing mandatory outdoors

Italy has made it mandatory to wear face masks outdoors nationwide in an effort to curb the spread of the coronavirus, as new infections jumped to the highest daily tally since April.

The decree was approved at a cabinet meeting after a steady increase in cases over the last two months and came into effect on Thursday.

Several Italian regions including Lazio, around the capital Rome, had already made face masks mandatory.

Italy is still recording far fewer daily cases than other large European countries such as France, Spain and Britain.