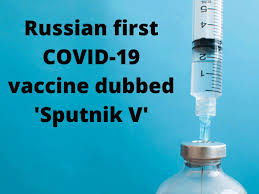 Russia on Tuesday declared itself the first country to approve a coronavirus vaccine with President Vladimir Putin saying one of his daughters had been inoculated.

Dubbing the vaccine "Sputnik V" after the Soviet-era satellite that was the first launched into space, Russian officials said it provided safe, stable immunity and denounced Western attempts to undermine Moscow's research.

Scientists in the West have raised concerns about the speed of development of Russian vaccines, suggesting that researchers might be cutting corners and coming under pressure from authorities to deliver.

The World Health Organization said any WHO stamp of approval on a COVID-19 vaccine candidate would require a rigorous safety data review.

"We are in close contact with the Russian health authorities and discussions are ongoing with respect to possible WHO pre-qualification of the vaccine," said the UN agency's spokesman Tarik Jasarevic in Geneva.

Putin had told a televised video conference call with government ministers, "This morning, for the first time in the world, a vaccine against the new coronavirus was registered.

"I know that it is quite effective, that it gives sustainable immunity," he said.