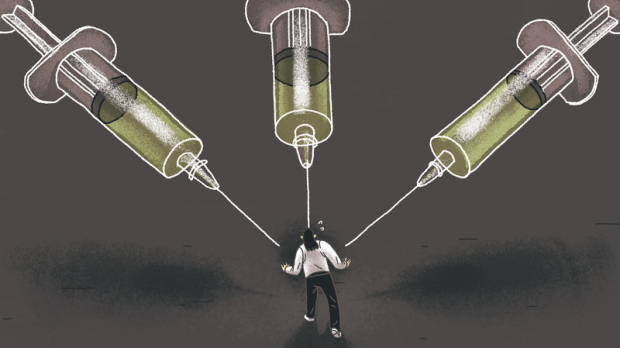 Johnson & Johnson has not only narrowed down a coronavirus vaccine candidate to test on humans, but it hopes to develop up to one billion doses of the vaccine by the end of 2021, CEO Alex Gorsky said Tuesday.

The scale of the plans is unprecedented, he also told Fox Business' "Mornings With Maria."

"This would ordinarily take about five years, but as we all know these are very different times," Gorsky told show host Maria Bartiromo. "We've got a team of scientists literally working around the clock since January."

The company expects to have information by the end of 2020 or early January at the latest to determine if its vaccine will be effective, Gorsky added, but the early testing is "very encouraging."

Janssen, the company's pharmaceutical division has been working with Harvard Medical School's Beth Israel Deaconess Medical Center to test the vaccine candidate. It plans to begin human clinical studies by September, with the goal of getting authorization to use the vaccine through an emergency use authorization by early 2021.

At that point, Gorsky said, the company wants to make millions of doses available in early 2021, with the goal of a billion doses out by the time that year ends. Production of the vaccine will be done both in the United States and globally, said Gorsky.

"As we're testing this vaccine, we're also ramping up production capacity in real time," he commented. "Not only do you need a safe and effective vaccine, you need enough quantity of the vaccine to actually make a difference."

Gorsky said the company has joined with the U.S. Biomedical Advanced Research and Development Authority, a part of the Department of Health and Human Services, in committing to investing more than $1 billion to fight COVID-19.

Kanye West: "They Want to Put Chips Inside of Us"

Kanye West: "They Want to Put Chips Inside of Us"

Infant Mortality Down; Number of Vaccinations Down -- Jon Rappoport

My Child, My Choice!

Mass-Vaxxing if Ordered Will Breach the Nuremberg Code