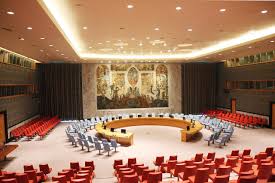 Most United Nations Security Council members are already pushing to vote in teleconferencing only and to rely on virtual meetings, however, Russia is reportedly blocking the initiative. Reuters reports:

Russia believes the 15-member body "shouldn't be afraid" to meet in person in the council chamber in New York.

The council has so far merely experimented with video conference meetings and is seeking to implement it during this public health emergency as a "last report" measure.

"Russia has prevented the Security Council from approving a U.S.-drafted procedural note, seen by Reuters, for meetings held by videoconference, said diplomats, speaking on condition of anonymity. Such notes must be agreed by consensus," the report continues.

The Russian position as articulated by its Ambassador Vassily Nebenzia, is that the UNSC Chamber is "one of the safest venues" in New York City and "the risk of getting the virus there is much lower than when we go to a shop for basic needs."