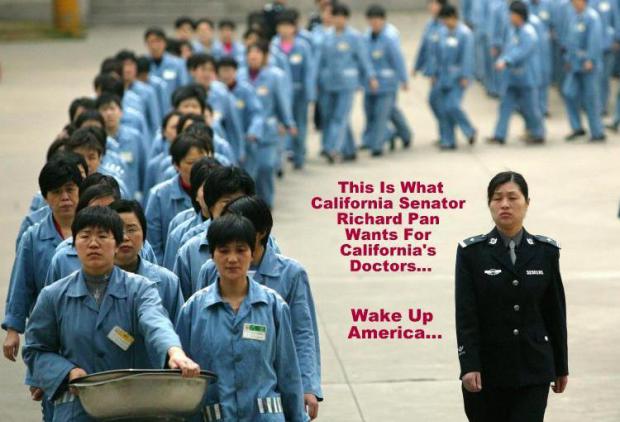 There Is Absolutely No Hope, in California, For Right Thinking Doctors. Their Lives Are Over…

Here's How Pan is Going To "GET" Them…

To understand what is actually going on in California one has to step back and look at geopolitics and California's place in the world.

Let's look at the connections between Hillary Clinton, Mainland China, and Big Pharma…

Then we need to consider that California, had Hillary been elected, would have been the model for the entire United States.

On May 18th, 2018 US News and World Report wrote a very lengthy article titled "China's Lock On Drugs."  The articles subtitle says it all:

Every Health Freedom Advocate on Planet Earth should read EVERY WORD of this article – for it puts everything into perspective.  In short, after reading it you will find that "China = Big Pharma," and "Big Pharma = China."  They are now, in the year 2020, one and the same…

Read this interesting quote from the article about America's jobs disappearing to China.

"Multinational drug companies, many of them headquartered in the United States, began buying ingredients for critical drugs in China after the U.S.-China Fair Trade Agreement passed nearly two decades ago. State-owned Chinese companies, buoyed by heavy government subsidies, set their prices so low that they were able to undercut established manufacturers in the U.S. and elsewhere, prompting them to shut down their plants and move their operations to China, the authors say.

"China offers (drug companies) incentives for transferring their production from here to there, and they're doing it," says Pat Mulloy, a trade lawyer and former assistant secretary of the Department of Commerce.

• Johnson & Johnson, based in New Brunswick, New Jersey, announced 4,800 job cuts in 2007 and 8,000 more in the U.S. and abroad two years later, the authors say, as it was preparing to open a new Shanghai-based research and development center in 2009. "We see this as a way to move from bringing great products to China to actually discovering and developing things in China," the company's CEO, Alex Gorsky, told the Wall Street Journal in 2015.

• Pfizer laid off more than 2,000 researchers, more than half of whom were at the firm's research laboratory in Groton, Connecticut. "One of the casualties of the 2011 layoffs was Groton's antibiotic research program, which was reportedly moving to Shanghai," the authors write in "China Rx," citing local news reports that described it as "the first wholesale move of a major U.S. pharmaceutical research unit to China."

Shifting production to China has made millions for the companies and their shareholders but hasn't trickled down to U.S. consumers, who are still paying more than consumers anywhere else in the world for their drugs. "The drug companies don't care about the United States," Slane says. "They only care about profits."

(3) Then it only gets worse.  Read the quotes below:

The safety of the U.S. drug supply is another concern, because the Food and Drug Administration lacks the funding and personnel to inspect Chinese factories, which may be forewarned of the inspectors' arrival. The most terrifying example involved a contaminated blood thinner, called Heparin, distributed by Baxter laboratories in 2008, which killed 81 people and sickened nearly 800 more.

The FDA identified Changzhou SPL, a Chinese subsidiary of Scientific Protein Laboratories, as the source of the contaminated drug.

"They're rapidly getting on parity with us in fighter jets, submarines and missiles," Slane said. "They have satellites that can take out our GPS systems. They have taken over islands in the East and South China seas that belong to Vietnam, the Philippines and Japan. They are militarizing the islands with missiles. Their intent is to push us out of the eastern Pacific."

"You don't have to be a military expert to see where all this is going," he says. "In light of all that, now we're dependent on (the Chinese) for our drugs?