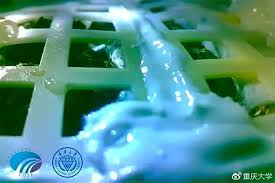 This week at London's Design Museum, one of the engineers behind the historic Chang'e-4 mission to the moon gave a demonstration of the spacecraft's 'mini-biosphere' where he and his team helped germinate the first seed ever on the moon.

The presentation, delivered by Xie Gengxin of Chongqing University, was part of the museum's 'Moving to Mars' exhibit showcasing a range of different technologies that will allow humans to survive long term in space and on other planets.

While previous groups had grown small plants on the International Space Station, which is in orbits the Earth some 250 miles above the surface, no one had yet accomplished the feat on the moon.

Xie and his team devised a cylindrical garden capsule to try and bring gardening deeper into outer space.

The capsule stood around 8 inches tall with a 6.5 inch diameter and had a rectangular seed bed that was loaded with cotton, potato, rape seeds, a variety of weed called Arabidopsis, and fruit fly eggs.