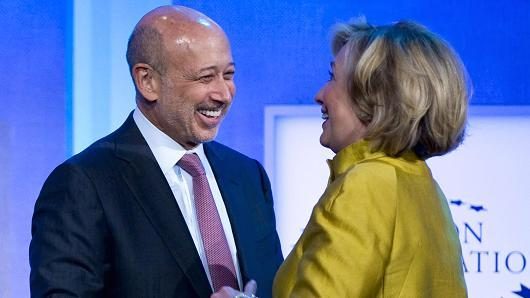 Anyone who feared Goldman might suffer a massive fine or, worse, criminal penalties (possibly involving current and former senior executives such as Hillary Clinton's very close friend, Lloyd Blankfein) can breathe a sigh of relief.

Goldman shares jumped 2.5% Friday morning after Bloomberg reported that the DoJ is seeking a settlement of between $1.5 billion and $2 billion for Goldman's involvement in the 1MDB affair.

That substantially less than most analysts had anticipated. Earlier this year, senior Malaysian officials made a big show of demanding that Goldman pay back all of the money stolen from 1MDB with interest, as well as any fees that the bank collected for its work underwriting three separate bond offerings that helped seed the fund. In total, the sum demanded came out to about $7.5 billion.

We know now that senior Goldman bankers, including then-CEO Lloyd Blankfein, signed off on the deals, ignoring warnings from the compliance department about Malaysia's point man for the project, the mysterious financier Jho Low. Which may explain why even the DOJ is now rushing to get this episode in the history books.