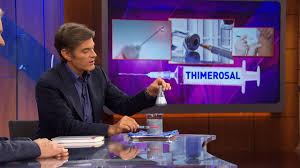 While it is certainly worthwhile to warn the public of the dangers of mercury in the flu vaccine, Marcella Piper-Terry of VaxTruth.org points out several facts regarding this issue that were not covered during the show, and how Dr. Oz did not exactly get his facts straight on a few things.

Sadly, this is representative of the current level of knowledge concerning vaccines both among the mainstream media and modern-day physicians. Parents of vaccine-damaged children do their homework and research well, and in many cases are more educated on this issue than both the mass media and many doctors.

It should be noted that Dr. Oz is not anti-vaccine, and he apparently required both of his guests to state that they too believe in vaccines in order to be on the show. Dr. Oz would want everyone to get the flu shot from batches where mercury is not added.

We disagree. The flu shot is the most dangerous vaccine in the U.S. even without the added mercury, and the U.S. government pays out millions of dollars in injuries and deaths due to the flu shot every year. There is also very little evidence that the flu shot is beneficial in preventing the flu, and plenty of evidence that it can make it worse.

Dr. Oz Show: Thimerosal in Flu Shots – What He Got Wrong & What You NEED to Know!

On September 11, 2014, Dr. Oz's guests included Robert F. Kennedy, Jr. and Dr. Mark Hyman and the topic of discussion was thimerosal in flu vaccines. It is great to see Dr. Oz expressing concerns about thimerosal, which is 49.5% mercury and is a potent neuro-immune toxin.

Dr. Oz advised his audience that pregnant women and parents of children should request thimerosal-free flu shots so they can avoid injecting mercury into their bodies.

There is a recap here, which is pretty good. In short, all three men agreed thimerosal in vaccines is a very bad idea. All three agreed it should be removed completely, not only from vaccines, but from ALL medical products. Period.

While I appreciate the effort, there were several inaccuracies in the show, which need to be cleared up.

1. Contrary to the assertions of Oz, Hyman, and Kennedy, thimerosal has not been removed from childhood vaccinations; it's still there. The FDA changed the rules so vaccine manufacturers do not have to include thimerosal on the label as an ingredient unless it is used as a preservative. According to the FDA, if thimerosal is used in the manufacturing process but it is not used as a preservative, the vaccine can be labeled "thimerosal-free" when that is not the case. You can read more about this semantic trickery and what it really means for your child here.  The point is, several vaccines given to infants and children still contain thimerosal, including the DTaP vaccine, DT vaccine, Hib (ACTHib, TriHIBit) and Meningococcal vaccine. Click this link and scroll down in the vaccine excipients list until you get to thimerosal. (On your way to "thimerosal," you might want to also notice all the other toxic ingredients and the vaccines that contain them.)

2. In addition to the problems with the FDA rule change, which allows vaccine-manufacturers to lie about the fact that their vaccines still contain thimerosal, Dr. Oz and his guests missed the fact that the meningococcal vaccine given to children age two years and older contains the same amount of thimerosal (50 mcg.) as the multi-dose flu shots they are so concerned about. Click this link and go to section 11, on page 17 of the Menomune manufacturer's insert.