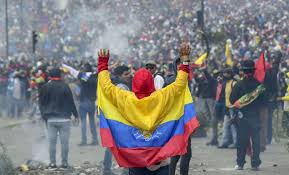 Former Ecuadorian President Rafael Correa has shared with Sputnik his impressions of events taking place in Ecuador, where people have taken to the streets to express their anger with the economic policies of President Lenín Moreno, who, in turn, has accused Correa of inciting the masses to riot.

Sputnik: There is an information war, and among other rumours, they say that you are going to Ecuador. Is that true?

Rafael Correa: No. I do not think that there is an information war, everything is very clear. What really exists is the "wall" of the Ecuadorian press, which has obscenely been supporting Lenin Moreno for these two and a half years, so much that people on the streets react negatively to the journalists from Teleamazonas, Ecuavisa, El Universo, El Comercio. They do not want to learn anything from this press but prefer to receive information from small radio stations, from the alternative press, from the regional press.