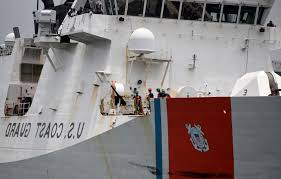 The U.S. Coast Guard is appealing for information from the public after a command center was sent a series of violent threats and hoax calls.

The transmissions were received via marine band radio off the coast of Florida. The unknown culprit, speaking in an American accent, cited links to the Russian government and threatened to set off anti-submarine weapons known as "depth charges" and shoot down planes.

The mysterious individual behind the most recent broadcast appeared to be the same person who made previous threats that started with him saying "Mayday" three times before talking about "scrambling all jets we are under nuclear attack," officials said this week.

Audio of the calls was published to the Coast Guard website yesterday but was not working at the time of publication. Navy Times reported it obtained a copy of the August 13 transmission, which lasted roughly 70 seconds and contained a series of bizarre threats.