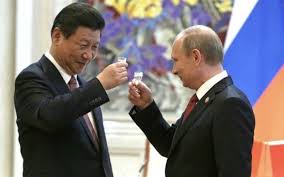 And while most politicians are all talk, in the case of both Russia and China, their actions speak louder than their words.

China's foreign exchange reserves jumped to $3.1072 trillion despite the falling yuan and escalating trade war with the US, while raising its gold holdings by nearly 2.89 million troy ounces (99 tons) in nine months. That's nearly five percent more since the end of last year.

As Bloomberg reports, that buying spree likely to persist in the coming years, according to Australia & New Zealand Banking Group Ltd.

Trade war restrictions, in the case of China, or sanctions, as with Russia, give "an incentive for these central banks to diversify," John Sharma, an economist at National Australia Bank Ltd., said in an email.

"Also, with increasing political and economic uncertainty prevailing, gold provides an ideal hedge, and will therefore be sought after by central banks globally."