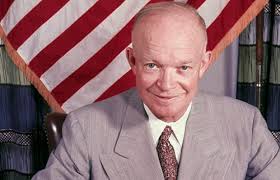 "If we had listened to Ike, millions of people would not have died in the wars of the last 57 years and we would have trillions of dollars less in debt."

Many Trump supporters, and even some on the left, like to talk about the "Deep State" secretly having complete control of our government, thus rendering our elected leaders to be nothing more than meaningless figureheads. Let's investigate.

During his ominous farewell, Ike mentioned that the US was only just past the halfway point of the century and we had already seen 4 major wars. He then went on to talk about how the MIC was now a major sector of the economy.  Eisenhower then went on to warn Americans about the "undue influence" the MIC has on our government. He warned that the MIC has massive lobbying power and the ability to press for unnecessary wars and armaments we would not really need, all just to funnel money to their coffers.