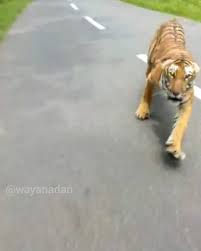 Footage shows the big cat, which can run at around 40mph, catch up with the bike and attempt to grab its wheel before darting back into woodland.

The near-miss was filmed on the edge of Nagarhole National Park, southern India, which is home to 72 Bengal tigers.

At the beginning of this year one of the park's tiger's killed three people, including a 28-year-old and 60-year-old man, before it was caught and tranquillised by officials.

Terrifying footage shows the predator rushes out of woodland onto the road as the motorbike roars past.

It charges straight at the machine and appears to try to grab the wheel.

Then, after appearing for five seconds, the big cat darts back into woodland.

As well as the attacks this year, in 2015 two farmers were killed on the parks edge by a male tiger.

One was a woman who had been grazing her livestock at the time.