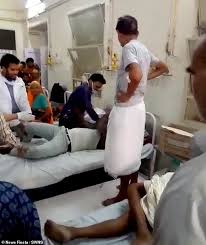 This is the shocking moment an angry doctor beats a 30-year-old patient in a packed hospital ward.

Filmed at the Sawai Man Singh Hospital in Jaipur, north-west India, the medic can be seen hitting the patient, named locally as Mubarik, repeatedly before appearing to slap him across the face.

The hospital claims the attack happened after the patient, admitted due to a stomach inflammation, assaulted two doctors. It also says the video has been edited to portray the unit in a bad way.

The doctor, wearing a blue shirt, is seen striking the patient again and again before climbing onto the bed.

He then appears to slap the patient across the face while the man tries to fend him off with his legs.

At the end of the clip, a doctor in a white coat intervenes and appears to ask colleagues to move away from the patient.