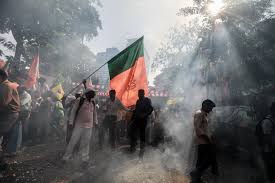 The result represents a stunning vote of confidence in Modi, a charismatic and polarizing politician who is part of a crop of right- leaning populist leaders around the globe.

Official results showed Modi's Bharatiya Janata Party, or BJP, on track to win 303 seats in Parliament, well above the 272-seat majority mark. No Indian prime minister has returned to power with a similar mandate in nearly five decades. The size of Modi's victory was unexpected, surpassing his party's winning performance in 2014.

The son of a tea seller, Modi first swept to power five years ago on a desire for change and a belief that he could transform this country of more than 1.3 billion people, unshackling the economy and creating millions of jobs.