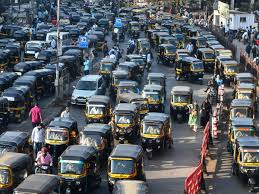 One at a time, he pulls out the two batteries powering the small vehicle, each about a foot high, five inches wide, and weighing 26 pounds. Kumar taps his key fob on the station, a large black box a bit shorter and wider than a vending machine. A locker pops open, revealing a fully charged battery. He pops it in, then repeats the action for the second battery. After just a few minutes of downtime, Kumar and his electric ride are back on the road, fully charged and looking for the next fare.

Globally, transportation accounts for 15 percent of greenhouse gas emissions, and electric vehicles are a big part of the solution. In the US and Europe, governments have worked to push people into electric cars. But in India, where fewer than four million cars are sold annually, two wheelers, autorickshaws (called tuk-tuks in other Asian countries), and buses remain the dominant modes of transportation. Which is why some manufacturers are now, for the first time, starting to power them with electricity instead of gasoline.

For Indians, this is about more than meeting the commitment they made in the Paris climate agreement. A study published in The Lancet found that in 2017, the country's air pollution—some of the worst in the world—killed 1.24 million people. In February, the government, in a bid to get more people out of gas-burners, approved a $1.4 billion, three-year scheme to subsidize electrics. Still, the vehicles remain out of reach for most buyers.