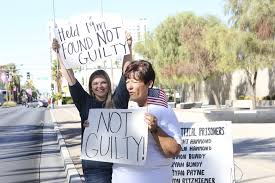 These tyrants just can't let it go. They can't make their case to the jury to find these men guilty so they are going to try them a third time and push other defendants' court date back further into the future!

After the jury acquitted two defendants in the Bundy Ranch case of all charges against them, they were deadlocked on two others, O. Scott Drexler and Eric Parker, both of Idaho.

Still, they were released from prison on Tuesday evening, but discovered on Wednesday that the government, who could not make their case to the jury, wants to try them again.

"Surprised? No. Disappointed? Yes," said Parker's lawyer, Jess Marchese. "It's clear at this point the prosecution is taking this personally now."

Marchese said it was unprofessional and unnecessary. "This is a business," he said. "And there's no need for emotion in a business."

It's actually pretty cowardly what Mr. Myhre has been involved in, in attempts to bring in situation and conduct that occurred well after Bundy Ranch against defendants to make his case, as well as being just fine with holding defendants up to five years without worrying about violating their right to a speedy trial.

Consider that Mr. Myhre is the same man who would not include the men found guilty in the first trial in the retrial for the charges they were not found guilty on because of time and expenses, but he will not let these men go to save money and time and actually give the other men their day in court in a timely manner.

The U.S. Attorney's Office in Las Vegas confirmed Wednesday it will go back to court for the third time in an attempt to convict two men accused of taking up arms against federal agents.

The answer is to file a claim, for damages, right inside the Government's complaint. File the claim against both: the name on the indictment against them, and the man/woman who signs the indictment, human to human, and the bond of that(those) human(s) - man-to-man. The claim is for money for wasting their time, and hardship damages. Make the money amount at least as great a the value of the damages and potential damages Government is seeking. Start advertising jury nullification. If Government withdraws their case, start a new one against the humans who messed with them, for the same things.

Greyerz - The World Is Now Entering A Terrifying Endgame

Glenn Greenwald: How Many Lives Will Be Lost Because of 'Irrational' COVID Policies?