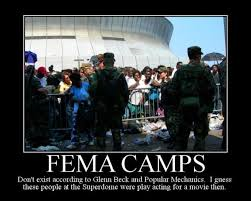 The U.S. government has already made clear in numerous official documents and announcements that its war on terror is increasingly focused on its own domestic political enemies. If you're conservative, Christian, a gun-owner, have expressed disapproval of your government in any way, a veteran, homeschool your kids, etc.,….well, this includes you.

As we reported in a post from last year, FEMA just ordered $1 billion in coffin liners, millions of ready-to-eat meals and body bags.

The camps have been prepared – and it isn't hard to see who they intend to fill them with.

Supreme Court Justice Antonin Scalia (shown) made headlines nationwide this week after bluntly telling law students at the University of Hawaii that internment camps to detain Americans would eventually return. Acknowledging that the infamous Supreme Court-approved internment of Japanese-Americans in wretched camps during World War II was wrong, the conservative-leaning justice followed up by adding that "you are kidding yourself if you think the same thing will not happen again." In "times of war," Scalia said, citing a Latin expression attributed to Cicero, "the laws fall silent."

1 Comments in Response to Justice Scalia: Americans Will Be Detained In FEMA Camps

Perhaps Scalia is right. Perhaps technically the States don't have much if any authority that can't be removed by their creator, the United States. Perhaps it was all a trick and a lie that the interpretation of things like the 10th Amendment could actually give the States some rights over the Federal.

Maybe Team law is correct when they clearly show that the present corporations known as States, are not the original State bodies that they were when they were formed, and that they now are simply Federal corporations like the Federal Reserve Bank, or the Internal Revenue Service.

Scalia may be correct about the States not having rights. But in the face of mankind, the Federal doesn't have rights, either.

Neither the Government of the States, nor the Government of the Federal has the authority to remove the rights of the people in any way. The 9th Amendment shows this when it essentially says that the people have the right to do anything that they ever had the right to do. The 7th Amendment shows this when it shows that common-law-of-the-people jury has the authority to overrule any law of the land through their vote in any court case.

If the States want to beat the Federal, they will start teaching their people about how to use the common law. The States, themselves, may lose some of their direct power over the people, but they will essentially and ultimately retain power over the Federal in the ways that the Constitution and Bill of Rights allows.

Bill Thornton (http://1215.org/) has the technical answers. Karl Lentz (http://www.broadmind.org/ and http://www.unkommonlaw.co.uk/) has the practical application. Neither is an easy study, but Karl shows the simplicity in his own way. Start now.

http://www.youtube.com/watch?v=HOkAHRzuiOA&list=PLHrkQxgz0mg6kUBciD-HIvTXByqjcIZ-D = Ten great Youtube videos, might be the best introduction to Karl. The last one is most important.

http://voidjudgments.com/ = The Secret is most judgments are Void on their face and not merely voidable.

http://educationcenter2000.com/Trinsey-v-Paglario.htm = Trinsey v. Pagliaro - Attorneys cannot "speak" in common law trials if the one who is bringing the suit orders it. Holding from Trinsey v. Pagliaro: "An attorney for the plaintiff cannot admit evidence into the court. He is either an attorney or a witness."