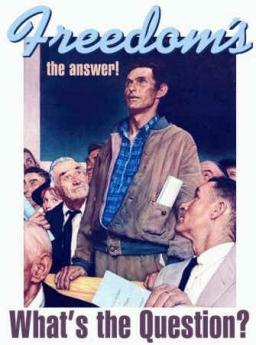 Late on Friday, Sept. 23, Maricopa County reported their remaining election results, including their tally for the write-in votes for Libertarian Candidates.

We quickly discovered that there were some problems with their report. Joe Cobb, running as a write-in candidate for the Libertarian nomination for Congress, C.D. 7 was reported to have received only a single write-in vote in all 38 polling precincts in Maricopa county, which, combined with the 9 write-in votes he received from Pima County, placed Joe just 2 votes shy of the 12 votes he needed to be placed on the general election ballot in November.

Only, Joe Cobb KNEW that he and 2 others at his household (in Maricopa County) had voted for him -- so Maricopa County failed to tally at least 2 more votes for Joe.

When this was brought to the attention of Maricopa County Elections (in the person of Kristi Passarelli as well as Karen Osborne) on Monday, at first they suggested that Joe or the other members of his household had failed to complete the ballot properly, but just to appease us, they'd take a quick look. Sure enough, at the end of the business day, we were notified that Maricopa County Elections had "discovered" 3 more write-in votes in Joe Cobb's home precinct. Apparently, the ballots with write-in votes are segregated for hand-tally at the polling place, and these ballots either were not properly segregated at the polling place, or were somehow later mixed in with non-write-in ballots from the precinct at County Elections central tally location.

We're told that, after some internal debate within County Elections and the County Attorney's Office as to whether Maricopa County should revise the vote count total to reflect that Joe Cobb in fact received sufficient votes to be placed on the ballot, they revised the numbers amended the canvas.

The bottom line is that Maricopa County undercounted the vote for Joe Cobb by a whopping 75% (and possibly more, as there are another 36 polling places where no write-in ballots were counted for Joe Cobb).

Today, we were informed by Maricopa County that, while they would do some additional checking as a "courtesy", once the General Election ballots are sent off to be printed (which will happen today or tomorrow), it will be too late to do anything for these three candidates, even should we discover another 1 or 2 missed write-in votes for each. Sure, they may have gotten enough votes, and, sure, Maricopa County Elections is responsible for accurately tallying the number of votes cast, but, they claim, it's just human error, as if that excuses it.

More proof that the idea that "every vote counts" is just another election myth!

1 Comments in Response to Arizona Elections - Libertarians Kept From Ballot

Tomorrow is the official canvass. Once that is done, it is final. I am glad Joe made it. I found the complete lack of vote counts for him from Maricopa, Pinal and especially Yuma counties to be literally unbelievable. The lack of votes from Pinal Co. in Dist. 6 is equally questionable.

This looks like a statewide (multiple county recorders offices) failing to do their paid job. How else can this be explained other than deliberate? And multiple sources = conspiracy.

I also know Joe mailed out 160 letters to registered libertarians asking for their write-in vote in the primary. I find it hard to believe that that only generated a handful of votes.