With all the serious problems facing the nation and the world, the problem of littering seems insignificant.

But it is not.

Litter says a lot about us.  It says something about class, race, ethnicity, and even political ideology.  It speaks volumes about our sense of community, or lack thereof.  It's also an example of the Tragedy of the Commons.

Then there is the paradox of millennials.  Steeped in communitarianism and environmentalism, they seem to be oblivious to their immediate environment.  I have yet to see a millennial pick up litter and throw it into a nearby trash can, assuming they even see it.  Mesmerized by their smartphones, they probably wouldn't see a dead body in their path.

The only people I see picking up litter are middle-age blokes like me.  A two-mile stretch of the busy street that bisects my community is kept clean by a guy named Chuck.  I keep a different two-mile stretch clean, as well as a parking lot near my house for a popular Forest Service mountain trail that climbs from 3,000 ft. to over 6,000 ft.   Amazingly, twenty-something hikers return to their Jeeps and Outbacks after enjoying nature and proceed to throw snack bar wrappers and other debris on the lot.

Patriots are another paradox.  They leave a trail of litter wherever they have gathered to celebrate Memorial Day and the Fourth of July.  They profess to love their country and then proceed to despoil it.  This former Army artillery officer dreads the day after these holidays, for I spend much of my daily walk picking up what the patriots have left behind.  Oftentimes, in addition to fast-food debris and beer bottles and cans, what they leave behind are the foot-high American flags that are stuck in the ground around yards and common areas.  In short order, the wind blows the flags into no-man's land, where they stay forever or until a patsy like me picks them up, which is ironic given that I'm not a flag waver.

If universities gave degrees in Litter Studies, I'd have a PhD in the subject.  I founded an influential environmental group when I lived in New Jersey, as well as starting a movement to clean up the misnamed Garden State, which is the most befouled state in the nation.  Also, I'm an avid walker who walks at least seven miles a day, or 2,555 miles a year.  I've walked in most major cities, most states, and many rural and wilderness areas.  The downside of walking is that disgusting flotsam and jetsam can be seen at 5 mph that cannot be seen at 30 mph or faster from the cocoon of a car.

Speaking of cars, automobiles no longer come with ashtrays.  Whether the government outlawed them or car companies did away with them on their own, it was a shortsighted decision.  Now smokers throw cigarette butts out the window, which is a very serious matter in my home state of Arizona, especially in the dry season that runs until the summer monsoons begin in mid-July.  Hundreds of thousands of acres of pine forests and desert scrublands burn each year.  In fact, as I type this, a man-caused fire is raging in the gorgeous Sycamore Creek wilderness area near Sedona.

And speaking of smokers, the most common litter found on roadsides is cigarette butts.  The next most common is empty cigarette packs.  Fast-food debris is a close third, with Taco Bell being the most popular brand with litterers.  This suggests that working-class whites are the culprits, a stereotype that is borne out by the amount of litter that can be seen where they gather.  Check out a Walmart parking lot sometime.  You'll see trash strewn about just feet away from trash cans.  Particularly offensive are those who buy a case of beer to put in an ice chest in the back of their pickup truck and then throw the packaging on the ground.

It's just as bad if not worse in Mexican barrios, but at least Mexican immigrants have the excuse that they don't know better, given the widespread poverty, corruption and trash in their mother country.  Also, whatever one's feelings about illegal immigration, the ugly fact is that illegals leave a trail of trash behind on public lands and private ranches as they walk from the border.

Wealthy Americans have no excuse for being pigs.  Take Bedminster, New Jersey, the location of one of Donald Trump's mansions.  Having once lived nearby, I used to take long walks and jogs through leafy Bedminster and the neighboring wealthy towns of Bernardsville, Far Hills, and Basking Ridge.  I used to joke that instead of leaving dead bodies in the trunks of cars parked at Newark Airport or in the swamps of the Meadowlands, the Mafia should put them in a trash bag and discard the bag alongside a New Jersey road.  The bag and its contents would remain untouched for decades.

Case in point:  On one of my long walks in Bedminster, I saw three large black trash bags full of trash and garbage in the weeds along the shoulder of country road.  I moved the bags to the shoulder of the road, thinking that the county road department or the homeowner across the street would see them and discard them.  On my return in the opposite direction, I saw that someone had thrown the bags back into the weeds.  My educated guess was that the culprit was the homeowner across the street, who lived in a multimillion-dollar house on three acres.

It was an educated guess because I had observed for years the piggish behavior of sophisticates who commuted to prestigious jobs in Manhattan from their leafy enclaves in the Garden State.  The New Jersey Transit train station near my house was a pigsty.  Even worse was the gravel lot where commuters in Armani suits would wait for a coach bus to pick them up for the trip to Manhattan.  An ugly rusty trash barrel at the lot went unused.  The commuters threw their Styrofoam or paper coffee cups and wrappings from their bagels and croissants on the ground, where the wind would blow the discards around the neighborhood.

One time, I was behind an expensive Mercedes at a traffic light in upscale Short Hills, NJ.  The middle-aged female driver lowered the window, stuck out a bejeweled arm, and proceeded to throw a bag of fast-food remnants on the street.  I did what any chivalrous gentleman would do:  I blared the horn and gave a finger sign. No doubt, she didn't have a clue as to the reason for my pique.

An aside:  Most of those who throw bags of fast-food debris on the street don't even have the sense to first close the top of the bag.  Instead, they leave the bag open so that the stuff inside comes out of the bag when it hits the pavement and is spread by passing cars and the wind.  Curiously, ants won't touch the food remnants.

One more NJ anecdote:  As part of my masochistic campaign to clean up the Garden State, I wrote a long op-ed for the Star Ledger, which was the state's largest daily.  I asked why Shop-Rite, the large New Jersey-based supermarket chain, had stores with disgusting parking lots, which were filled with piles of trash and even abandoned tires, including in some of the richest suburbs in America.  The owner of the chain wrote a rebuttal.  Since he couldn't deny that the stores were disgusting compared to supermarkets in other regions of the country, he used the excuse that there was nothing he could do because the stores were owned by franchisees.

The Tragedy of the Commons says that people care less about public property than private property.  Shop-Rite showed that this isn't always the case.  I'll leave it to libertarians to gouge each other's eyes out on the question of whether the government should intercede when owners of private property don't maintain their property and thus create eyesores that decrease the quality of life and property values of neighbors.  If this has ever happened to you, as it has happened to me, you might be tempted to gouge out the eyes of libertarian purists who say that what people do on their own property is no one else's business.

This brings us to the question of whether individualism explains the propensity of Americans of all stripes to litter, while the opposite is the case with more communitarian cultures, such as Japan and Sweden, where the group and society are more important than the individual.  A case can be made either way because there are so many outliers around the world that don't fit any mold.  Parts of Berlin, for example, are covered in graffiti and strewn with trash.  The same with Paris and London.  At the same time, Switzerland sparkles.

Then there is the country of my forebears, Italy, where the southern half of the boot is dirty while the northern half is relatively clean.  This cultural artifact was carried to the United States by Italian immigrants.  For example, in my boyhood home of St. Louis, the Italian section was as spotless as Switzerland, due to being settled primarily by northern Italians.  By contrast, sections of New Jersey settled by emigrants from Sicily and Naples were . . . well, they were typical New Jersey.

Having recently moved to Tucson from Scottsdale, Arizona, I frequently walk on the bike/walk path that encircles the city for over 100 miles and runs for much of the way along the Rillito River, which is dry most of the year.  The other day I spoke with middle-age volunteers who were picking up litter along the path, complimenting them on their good job and asking how I could join their group.  I also asked why the path was clean but the dry river bottom was not.  They explained that the county discourages people from cleaning the river bottom, because there are homeless encampments hidden in the brush, where the homeless can be quite aggressive.

The homeless can also be pigs.  They not only leave piles of trash at their encampments but also burn trash and toilet paper in the public restrooms along the way to stay warm in the winter.  There is no telling how many of them have tuberculosis, hepatitis and other diseases.  One day I saw a homeless guy eating something out of a five-gallon paint bucket, which was covered in blood.

What kind of society lets this happen?  What kind of warped do-gooder thinking is behind it?  Letting the homeless live this way is not good for the homeless or for the general public.  Pretending that it's an important civil liberty issue makes a mockery of true civil liberties.

What does this say about us?  It says the same thing that littering says about us.  And what it says isn't good. 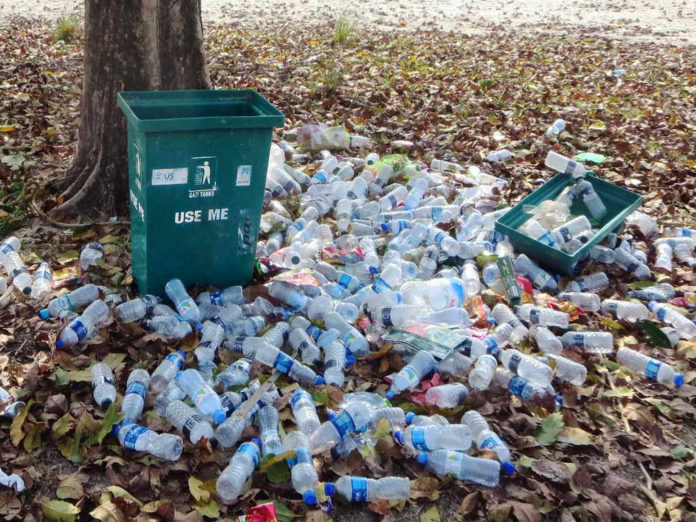 1 Comments in Response to What Does Litter Say About Us?

We desperately need a 25 cent deposit-return law to get a 99 percent return on all glass, plastic and metal containers. We're running out of resources. However, 20 to 30 percent Americans don't give a crap. And, with our endless multiculturalism, we've got millions who toss everything as a matter of their cultures. I've bicycled across the USA 12 times coast to coast to see millions of dumps, autos, motor homes and more trash than can be imagined. Americans have trashed this continent beyond understanding in 150 years. It will take Mother Nature a billion years to decay the debris and refuse. Pretty sickening and pathetic.