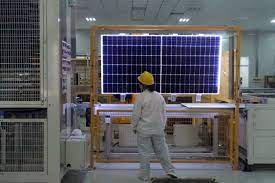 Nov 11 (Reuters) - More than 1,000 shipments of solar energy components worth hundreds of millions of dollars have piled up at U.S. ports since June under a new law banning imports from China's Xinjiang region over concerns about slave labor, according to federal customs officials and industry sources.

The level of seizures, which has not previously been reported, reflects how a policy intended to heap pressure on Beijing over its Uyghur detention camps in Xinjiang risks slowing the Biden administration's efforts to decarbonize the U.S. power sector to fight climate change.

The "Price Shock" is Just Starting: German Industry To Pay 40% More For Energy Than Pre-Cr

How A Brick & Rock Battery Is Changing Energy Storage