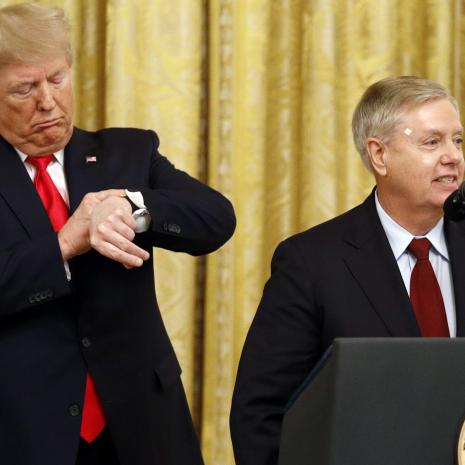 Lindsey Graham has warned Donald Trump that if he doesn't drop his obsession with the 2020 election he risks the January 6 Capitol riot becoming his 'political obituary'.

In a report by The New York Times, the South Carolina senator and staunch Trump ally said he believes he can make the former president a unifying figure in the Republican party - but only if he moves on from his fixation with 2020.

Since his defeat to Joe Biden, Trump has doubled down on claims that the 2020 election was 'rigged' and made repeated allegations that he only lost because of widespread election fraud. Trump has yet to offer any proof to substantiate those claims, which have failed every legal challenge he has attempted.

'What I say to him is, 'Do you want January the 6th to be your political obituary?' Graham said. 'Because if you don't get over it, it's going to be.'

According to the New York Times, during his frequent golfing trips to Mar-a-Lago, Graham is still trying to persuade Trump to 'take it down a notch' and play by the rules.

Graham initially backed Trump's claims about election fraud in the aftermath of the his defeat to Joe Biden in November, but after the January 6 riot he made a dramatic speech declaring 'count me out'.