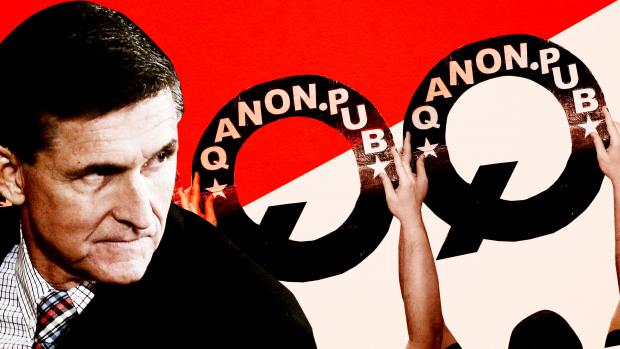 Former Trump National Security Adviser Michael Flynn is going all in on the QAnon conspiracy theory, promoting an online store to sell QAnon hats and T-shirts, the proceeds of which will benefit his partnership with a prominent QAnon booster.

Flynn's drawn-out legal battle with Special Counsel Robert Mueller turned him into a hero for QAnon believers. Many QAnon supporters, who rely on mysterious online clues to construct a worldview where the Democratic Party and other institutions are controlled by a cabal of pedophile-cannibals, claim that Flynn is "Q", the anonymous figure behind the conspiracy theory. They also took a previously obscure Flynn quote about the American military's "digital soldiers" as their banner, adopting the phrase to refer to QAnon believers themselves.

Flynn started to more aggressively court his QAnon fans this year, taking the "QAnon oath" in July and appearing on QAnon podcasts after receiving a pardon in November. Along the way, Flynn once again became an adviser to Trump, reportedly urging the president to impose martial law in a recent, heated Oval Office meeting.

Flynn aligned himself even further with QAnon on Tuesday, endorsing a T-shirt website called "Shirt Show USA" that sells QAnon gear and other "official" Flynn-themed merchandise. The website's offerings include camo trucker hats, T-shirts, and sweatshirts with the phrase "WWG1WGA," a reference to the central QAnon motto, "Where we go one, we go all."