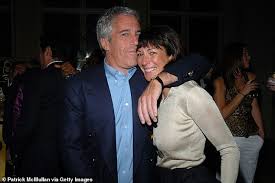 Borgerson, 44, is 'devastated' over Maxwell's imprisonment has offered a $30 million bail in a last ditch attempt to secure her release before Christmas

He will put up $25m as a security which will be forfeited if she flees before trial, a report has claimed

The other $5m will come from her siblings,  who like Maxwell are the children of the late disgraced British newspaper tycoon Robert Maxwell

They lived together at their $2.4m oceanfront home in Manchester-by-the-sea in Massachusetts, DailyMail.com first revealed

But Maxwell moved when she bought her own $1m property in New Hampshire, where she was arrested in July

Maxwell, a British socialite, is accused of procuring girls as young as 14 for Epstein to abuse and perjuring herself in a separate civil case