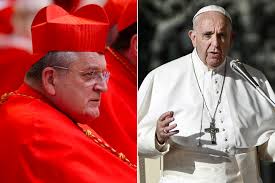 Cardinal Raymond Burke, a frequent critic of Francis, said the pope's comments should be "rightly interpreted as simple private opinions of the person who made them."

"Such declarations generate great bewilderment and cause confusion and error among Catholic faithful," Burke, a member of the Vatican's highest court, said in a statement Thursday on his website.

He added that Francis' views were contrary to Catholic teachings.

The pontiff, 83, endorsed civil unions for same-sex couples in a 2019 interview with Mexican broadcaster Televisa. The never-before-seen clip was aired in the new documentary "Francesco," the Washington Post reported.

"Nobody should be thrown out, or be made miserable because of it."

On Thursday night, Televisa spokesman Ruben Acosta Montoya confirmed the pope's comments in the 2019 interview to the Washington Post and accused the Vatican — which owned and controlled the cameras — of removing it from the segment.