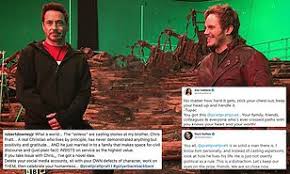 Critics branded him 'Hollywood's Worst Chris', pointing to his involvement in a conservative church as evidence that he's secretly a fan of President Trump

Schwarzenegger joined the fray on Instagram, slamming critics who called to 'cancel' her husband