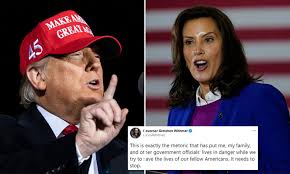 GOVERNOR Gretchen Whitmer has slammed Michigan Trump fans for chanting "lock her up" at a Saturday rally, saying it puts her family "in danger."

The chant comes a week after the FBI uncovered a plot to kidnap the governor by a local militia group.

Speaking at his rally in Muskegon, Michigan, President Donald Trump said "hopefully you will be sending [Whitmer] packing soon," which was followed by a chant of "lock her up" from the crowd.

Trump responded by saying "lock them all up."

But the governor, who was targeted by at least six men with ties to the Boogaloo Boys movement, quickly clapped back on Twitter.

"This is exactly the rhetoric that has put me, my family, and other government officials' lives in danger while we try to save the lives of our fellow Americans," she raged.

"It needs to stop," she added.

The event was reportedly an attempt by the group to distance themselves from the Wolverine Watchmen, a local armed militia implicated in the criminal plot.