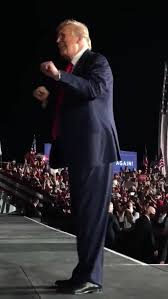 However, after our 74-year-old President got the Coronavirus, people had reason to worry about his health. Well, worry no more, my friends because President Trump is feeling good enough to dance on stage.

Apparently, Trump was feeling so good after his rally in Sanford, Florida last night that he gave his supporters a little bonus dancing after it was over.

Of course, Trump has done this before. In fact, he particularly seems to like dancing to YMCA at rallies.

Of course, we also can't forget his dancing on Saturday Night Live.

Dancing on stage is a good move for Trump for a lot of reasons. It shows he's still healthy and energetic after getting Corona. It's fun and entertaining. It's even kind of endearing and makes for a nice counterpoint to all the liberals saying he's a monster. Really? That guy is a monster? The guy doing funny dance moves to YMCA? Good move by President Trump.