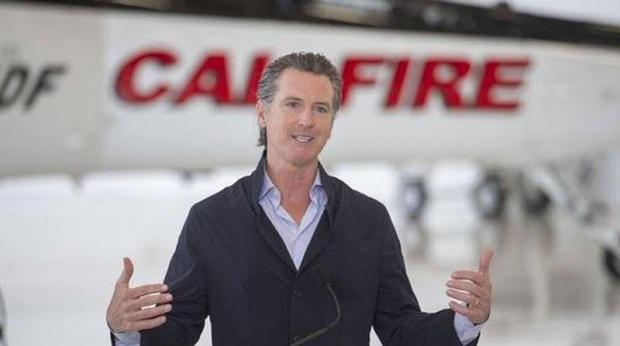 He has become an economic troll.  With his state accounting for almost 15% of the national GDP, hobbling his state's economy, even as counties are already starting to meet the criteria he set for relaxation of restrictions, depresses national output and employment statistics and thereby contributes to defeating President Trump.

Newsom, who is becoming known to Californians as Newssolini, is really stretching to find excuses to keep businesses closed and Californians unemployed and reverting to race-pandering.  Jennifer Van Laar of RedState writes:

Now that more counties are set to move out of the most restrictive tier, Newsom's changed the game again and has added an "equity requirement" counties must also meet before they can move down a tier.

For a county with a population of greater than 106,000, the county must:

Equity Metric. Ensure that the test positivity rates in its most disadvantaged neighborhoods, as defined as being in the lowest quartile of the Healthy Places Index census tracts, do not significantly lag behind its overall county test positivity rate, as described in detail below.

Targeted Investments. Submit a plan that (1) defines its disproportionately impacted populations, (2) specifies the percent of its COVID-19 cases in these populations, and (3) shows that it plans to invest Epidemiology and Laboratory Capacity for Prevention and Control of Emerging Infectious Diseases (Strategy 5: Use Laboratory Data to Enhance Investigation, Response, and Prevention) grant funds at least at that percentage to interrupt disease transmission in these populations. The targeted investments can include spending on augmenting testing, disease investigation, contact tracing, isolation/quarantine support, and education and outreach efforts for workers. Effective for the October 13th tier assignment, this plan must be submitted before a county may progress to a less restrictive tier. Due to data limitations in small populations, the equity metric described above cannot be reliably applied to smaller counties, as described below.