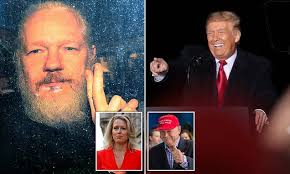 Donald Trump offered Julian Assange a 'win-win' deal through a political ally to avoid extradition if he disclosed the source behind leaked Democratic party emails, a court heard today.

Jennifer Robinson, one of the lawyer's representing the WikiLeaks founder, said then Republican then-Congressman Dana Rohrabacher and Trump associate Charles Johnson presented themselves as acting as conduits for the President to tout an arrangement.

They said Assange, 49, would be left alone to 'get on with his life' if he revealed the DNC hacking source, which was of 'value' to Mr Trump, Ms Robinson claimed.

The US government's lawyer said it was not contesting the evidence but did not accept that Rohrabacher was telling the truth when he said he was acting on Trump's behalf.

She said the two told her they wanted to resolve suspicion over Russia - which Trump has repeatedly claimed has not been proven to have hacked the DNC, in the teeth of his own intelligence community's verdict.