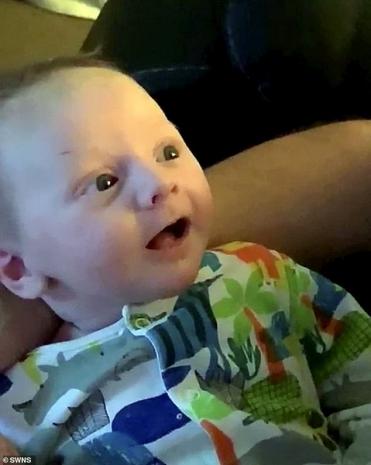 Charlie-John Taylor-Mullington stunned mother Caroline, 37, and father Nick, 36, from Willaston, Cheshire, when he replied to his father's greeting by repeating the word.

The interaction, which was filmed on Caroline's mobile phone, saw Charlie strain to form the word his father was saying before eventually managing to formulate the word.

Most infants typically speak their first word between 10 and 14 months old and by the time they are a year old they have a small vocabulary of words they understand.

During the clip, which was filmed at the family home on August 21, Nick cradles the infant in his arms and greets him with the word: 'Hello.'

Charlie-John then opens his mouth and begins to shape the word as his father watches in awe.

As his son utters the greeting, Nick smiles before replying: 'Hello to you as well.'

Following the heartwarming scenes, Caroline said: 'It was magical. We had tears in our eyes. We were just in utter shock!

'My husband Nick had Charlie in his arms and was just saying ''hello'' slowly to him. I think he loves Nick's deep voice.