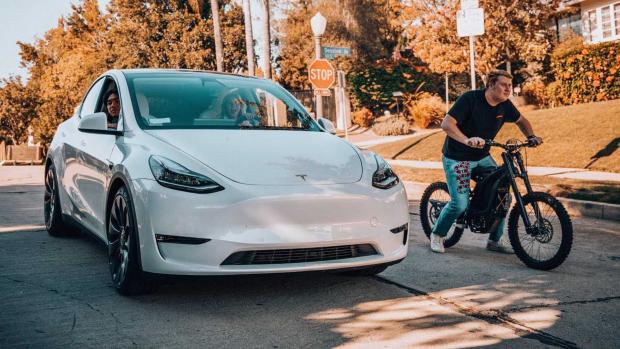 A Tesla Model Y versus a very powerful electric bike in a drag race. Not the matchup we were expecting but does the Model Y claim race victory yet again?

We've seen more than our fair share of Tesla races, but few have featured the Y. To date, we've seen the Model Y take down the Dodge Challenger Hellcat Redeye in four straight races and we recently posted on the race featuring Performance versions of the Model Y, Model 3, Model S and Model X, but beyond that, the Y doesn't seem to get pitted against many rivals, unlike what we see almost daily with races featuring the Model 3 or Model S.

So, when we stumbled upon this unique matchup featuring a Model Y versus a highly capable electric bike, we thought we might be in for a surprise. Perhaps the light yet very powerful electric bicycle (which looks more like a small electric motorcycle or scooter) can actually beat the Model Y.

Unfortunately, the video progesses very slowly and there's no racing action at all until the 8-minute 30-second mark, so flip forward to there if you just want to catch the Model Y versus e-bike showdown.

Of note is that the rider of the e-bike actually has to put a bunch of his weight onto the handlebars to avoid popping a wheelie or even worse, flipping over backward.

The video description doesn't provide us with much info on the bike, so we're not certain of its specs, but we do know it's a Sur-Ron Light Bee. The race itself is quite short and claimed to be kept to under the speed limit of the street upon which the race takes place.

Watch Canoo Showcase The Performance Of Its Skateboard Chassis