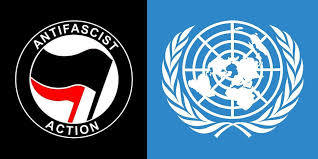 Yes, that is actually what Leftists are demanding. The lawyers representing George Floyd's family, in collaboration with the ACLU, are pressuring the United Nations to "intervene" in the United States on human rights grounds.

Typically, United Nations interventions are reserved for gross human rights violations like genocide or ethnic cleansing. There were ten unarmed African Americans killed by police last year. The majority were deemed justified and the police officers determined to have broken the law have been indicted, or are currently being investigated. Every loss of life is tragic, but the idea that this justifies a human rights intervention from the UN is ludicrous.

Last night, UN "Human Rights Experts" also released a statement condemning the crackdowns against the riots and looting, threatening to take action against the US for attacking and arresting what they called "human rights defenders" on the ground. This is the first step towards a true UN intervention…