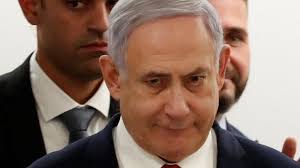 ith a bump of his elbow, Blue & White Party leader Benny Gantz received a mandate from Israeli President Reuven Rivlin to try and form a new ruling government coalition, after a prior attempt by Gantz back in September failed.

As Netanyahu struggles desperately to stay in power at least long enough to avoid being prosecuted for corruption charges, the PM, who is presently leading an emergency unity government as Israel struggles to combat the coronavirus outbreak, has skillfully used the present circumstances to his advantage.

However, on Sunday, 61 members of the Knesset voted to recommend that Gantz be offered the opportunity to form the government. To succeed, he will need to win a majority of votes in the 120-seat Knesset. The problem, is that two members of Gantz's own Blue and White Party said they wouldn't vote to back him as PM if the Arab Joint List remains part of the coalition.