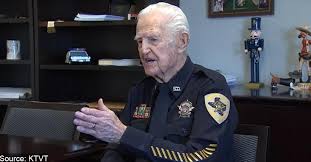 After a 74-year career in law enforcement, Bill Hardin, 97, will be honored with his own exhibit at the Chisholm Trail Museum in Cleburne, Texas.

Hardin currently serves as a reserve deputy with the Johnson County Sheriff's Department. He's already been through two retirements from law enforcement agencies in a career that began in 1947 with the Fort Worth Police Department.

In a Facebook video, Hardin recalled the instant respect he was shown when he wore his police uniform.

'I remember walking ... to catch a bus. I was in full uniform.  I got on the bus and dropped my coin. The driver said to me "policeman don't have to pay" and gave me back my token.'

Hardin remembered one interaction that has stuck with him all these years. One day, he pulled over a driver who ran a red light. Then Hardin peeked into the man's  backseat and saw two children.

'They said, "Daddy, are you going to get a ticket? That means we won't get to get a hamburger",' Hardin said.

Hardin closed his ticket book and both he and his partner gave the man a dollar to buy the kids burgers.

'It's things like that that make the job worth doing,' said Hardin, who also is a veteran of World War II.

'Tyranny Without a Tyrant': Hannah Arendt on the Root and Growth of Violence

I Fought The Fed...And I Won

What the Marxist Zeitgeist Has Wrought