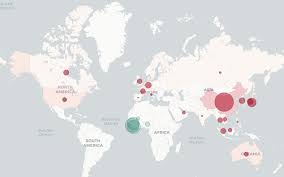 The true scale of the coronavirus epidemic has been laid bare thanks to an interactive map that compares it with other deadly disease outbreaks.

The map shows coronavirus has already dwarfed the death and infection rate of SARS, which killed 774 people and plagued 8,098 in 18 months.

By comparison, the new virus has killed twice as much and infected more than seven times that in less than eight weeks.

The map highlights that coronavirus has a much wider spread than Ebola, despite being less deadly.

Some 11,300 people were killed during the African epidemic, but it mainly affected Guinea, Liberia, and Sierra Leone.

By comparison, coronavirus cases have been recorded in at least 28 countries and territories.