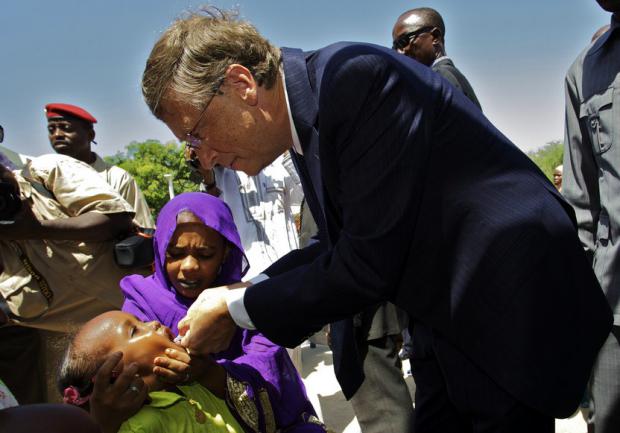 This story has been updated.

As Nigeria's battles on to become a polio-free country, Bill and Melinda Gates have taken an extraordinary step to give Africa's largest economy a helping hand through their foundation.

The foundation will pay off a $76 million loan taken from Japan to aid the fight against polio. The loan was taken in 2014 and repayments were due to begin this year. A Gates Foundation spokesperson confirmed the loan repayment in an email to Quartz. Gates Foundation says it agreed to repay the loan after Nigeria met the condition of achieving more than 80% vaccination coverage in at least one round each year in very high risk areas across 80% of the country's local government areas. The loan will be repaid over a period of 20 years.

The news comes as Nigeria counts down to becoming polio free and completing another year without the discovery of any new cases. No new cases were recorded in 2017. That's a far cry from 2012 when Nigeria accounted for more than half of all polio cases worldwide.

But Nigeria has experienced previous false dawns in its fight to become polio-free. In Aug. 2016, the World Health Organization (WHO) announced the discovery of two cases in Nigeria's troubled northeast. The timing of the find was heartbreaking as Nigeria was set to mark its second year without any polio cases and was close to confirming the eradication of the disease

At the time the Bill and Melinda Gates foundation said while it was "deeply concerned," the overall progress which had been made encouraged it to continue working with several partners to eradicate the disease in Nigeria. That progress, particularly over the last decade, has seen the number of annual cases reduced from hundreds to tens. Since 2014, only 10 cases have been confirmed across Nigeria, according to WHO data.

While polio has no cure, it can be eradicated. Unlike several other diseases, the polio virus cannot live within an animal host and can only survive for two months outside the human body. As such, the key to ending the disease is consistent and widespread immunization. But the insurgency in Nigeria's northeast continues to pose a major obstacle. Despite the progress made by Nigeria's army, several parts of the region still cannot be accessed by health and immunization workers leaving some children at risk of the disease remain out of reach.

The Moderna & Pfizer Covid jabs are legally NOT Vaccines!!!

SAGA "No Jab No Cruise" Discrimination ? NO EXCEPTIONS WHATSOEVER