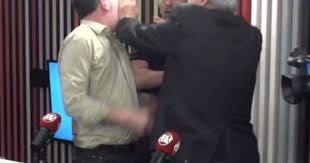 Journalist Glenn Greenwald was slapped in the face on air by a Brazilian journalist, shown in a video posted Thursday on Twitter.

Greenwald and Augusto Nunes were speaking on "Jovem Pan News," a Brazilian radio station, according to the video posted by journalist George Marques. The two men are seen arguing in Portuguese, and the disagreement escalates when Nunes turns physical and slaps Greenwald in the face.

The two men were arguing about Nunes's past comments about Greenwald's children, who he has with husband and Brazilian politician David Miranda. Greenwald confronted him about the comments and called him a coward, resulting in the physical fight, BuzzFeed News reported.

Nunes reportedly suggested that child services look into the adopted children because Greenwald and Miranda are too busy with their work.

After trying unsuccessfully to hit Greenwald in the face, the two men stood up and Nunes was able to land his second attempt. Other people can be seen in the video breaking up the fight. (RELATED: 'SO DISHONEST': Tucker And Glenn Greenwald Go After Media Lies On Trump-Russia)

Greenwald works for The Intercept as one of the three co-founding editors. He is known for his series of reports in June 2013 by The Guardian. In it, he detailed U.S. and British global surveillance programs. The reports were based on classified documents leaked by journalist Edward Snowden.

Greenwald did not immediately respond to a request for comment.