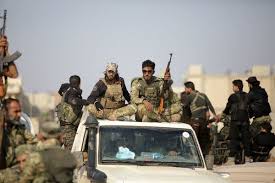 Turkish and Russian troops in armoured vehicles held their first joint ground patrols in northeast Syria on Friday - and a deadly car bomb in a northern town took the lives of 13 people, it emerged today.

Turkey and allied Syrian rebels launched a cross-border offensive against the Kurdish YPG militia on October 9, seizing control of 75 miles of land along the frontier.

Ankara and Moscow last week agreed to remove the militia fighters to a depth of at least 19 miles south of the border - and Russia told Turkey that the YPG left the strip.

On Friday, Turkish and Russian troops in armoured vehicles held their first joint ground patrols in northeast Syria under a deal between the two countries that was said to have forced the YPG away from territory near Turkey's border.

Today it was revealed that a car bomb that detonated in the Syrian town of Tel Abyad, near Turkey's border, killed at least 13 people and injured more than 30, according to Turkish state media and the Syrian Observatory for Human Rights.